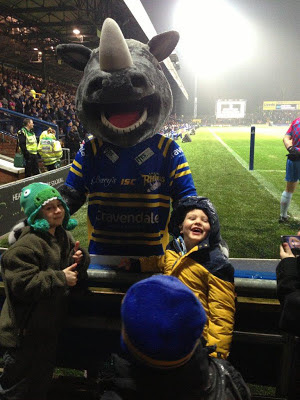 When I ask my son what he did at school he rarely enlightens me very much on the day's activities, but recently he said: "A rhino came to see us".

Visions of the school's tortoises completely put in the shade by more exotic wildlife were soon dispelled when he added: "He was wearing a rugby shirt."
Aha.....it was the Leeds Rhinos Rugby League team's mascot, Ronnie.

A funny conversation ensued during which I failed to convince him that there wasn't an entire team of players in big fluffy grey costumes. Anyway, he saw for himself last night when his daddy took him to Headingley Stadium to watch a match. Here he is on the right, catching up with Ronnie...........