Trouble in the Library 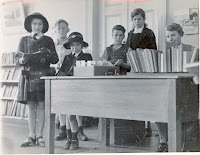 When I spotted the poster at nursery I could already feel the smug sense of achievement. In an instant, I had decided to take my Darling Little Boy to meet the well-known children’s illustrator who would be visiting our local library.

Perfect timing, too, as we’d been reading lots of his books of late.

I emailed friends and led the charge. I aimed to get there early and bag a good seat, which had the fortunate effect of causing me, for once, to arrive on time, just before it was due to begin at 2.30pm.

But as we approached the library, we could see a two families talking outside. A moments earwigging revealed that they had not got in, it was full!

My heart sank. My little angel was to be denied a literary, cultural experience, and I brownie points. I went inside to see for myself. The place was full of disappointed parents and their children.

It was mayhem. Many of the mummies and daddies were haranguing the weary-looking staff, who conceded that this should have been a ticketed event. They had suggested it, but head office said no.

One of my friends had got in, two others were caught out like me.

What made matters worse was that those truly organised parents, not those just posing as such like yours truly, had arrived at 1pm and waited in the main library, only for the crowd who arrived at 2.20pm to be ushered straight upstairs to the speaker’s lair and fill the 100 available spaces.

With no other option, the crowd set about reading to their children, but cast regular, righteous, sulky glances at the desk. The sense of outrage hung heavily in the air.

“There are too many adults in there!” went up a fresh cry of protest. “Could we ask some of them to leave to make way for more children?” It was like Titanic without the water.

I must admit that by now my disappointment had subsided, the drama unfolding outside more appealing than the illustrator within.

Possibly the least equipped personality to assuage the baying crowd sidled up to the throng in the children’s section. The bearded young chap leant against a bookcase and in the softest of voices announced: “We’re taking down the names of people who have been disappointed not to see the illustrator,” then added: “I’m not really sure why, but...” and mooched off again, leaving the crowd to its disgruntled story-telling.

In the end, the illustrator was a hero and agreed to do another session. So there we were, watching him draw clever animals at the behest of his (second lot of) audience members.

Someone shouted out “tiger”, and he obliged. Darling Little Boy said very loudly. “It’s a wolf”. I had to agree with him, it looked quite wolfish. The picture complete, applause duly rippled. The little heckler beside me, however, shouted: “I’m not clapping, it’s a dog!”

Who would have thought a trip to the library could incite a desire to challenge authority in one so young?
Posted by Claire Bottomley Book Club Mum at Wednesday, February 15, 2012
Email ThisBlogThis!Share to TwitterShare to FacebookShare to Pinterest