Time for some straight talking 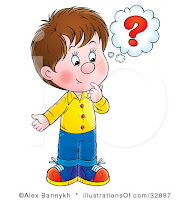 Two things happened this week to give me a wake-up call as to the complex workings of my Darling Little Boy's mind as he struggles to make sense of the world. I know all you parentals out there will recognise the hilarity, wonder and awe you feel when you hear them make a dead-pan pronouncement about something they have taken in its literal sense.

Firstly, DLB started a conversation about ‘who we know in Birmingham’. This in broad terms includes my dad and step-mum, and my sister Rosie, who lives with them when she's not at university in Brighton. So he went through the list....Grandpa, Granny, Auntie Rosie.....then he came to Chris, Rosie’s one-time boyfriend with whom relations have recently become strained.

I never thought to explain Chris’s presence and then absence to Darling Little Boy until a thought occurred to him and he looked me straight in the eye and asked: “Is Chris dead?”
Following the death of his paternal grandmother’s dog, Ellie, who of course used to always be there when we visited, and now isn’t, I could see exactly how he had reached this conclusion.


So we had a ‘sometimes people fall out’ talk, which I hope made things more, rather than less clear, but there’s a nagging doubt there...

The second thing was when he was eating lunch and chatting away to me about a planned trip to Center Parcs with friends.

“Will Alice be there?” he asked.

“But she came last time.”

“I know darling but her mummy will have a little baby to look after by then.”

(realising he thinks I mean Alice’s two-year-old brother, George). No darling, I don’t mean George, Alice’s mummy is having a new baby.”

Through silent tears of laughter I explained that Alice and George were getting a new baby brother. Quick thinking, however, might have made me answer in a casual tone:

“Oh it just didn’t work out. He wouldn’t give up his dummy or eat vegetables!”
Posted by Claire Bottomley Book Club Mum at Thursday, February 09, 2012
Email ThisBlogThis!Share to TwitterShare to FacebookShare to Pinterest