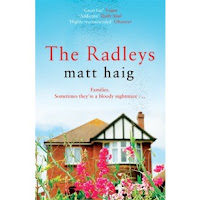 Synopsis:
Peter and Helen Radley live an inconspicuous life with their teenage son and daughter, Rowan and Clara, in the village of Bishopthorpe just outside York. He is a GP, she’s an amateur artist. They drive a people carrier and listen to radio 4. Rowan is being bullied at school and anaemic Clara has just turned vegan.
We soon realise, however, that this typically middle class couple are in fact abstaining vampires, fighting a daily battle with withdrawal from blood – a battle they have also forced upon their unknowing offspring.
That is until Clara is attacked by a classmate at a drunken party and finds her self-defence turns into a confusingly satisfying blood bath that her parents are forced to clean up and more importantly, explain.
As the family’s carefully constructed life begins to unravel, we follow an energetic romp as suburban drama meets full-blown vampire fantasy.

“I read it without realising where it was going, I didn’t know about the vampire thing, I thought it was a family drama. It made me realise that I don’t want to know about a book before I read it as I definitely enjoyed it more this way. (Although we realised it depended upon which book cover you had as to how possible this was!) I also had relatively low expectations. I liked all the literary links and references to people throughout history who could have been vampires.” - A

“I liked it. What I needed at the time was something easy to read, I read it around Halloween, it wasn’t quite ‘take your brain out’ stuff but you didn’t have to link it back and work things out and it was very well written.” - J

“I found the actual story quite sad and hopeless. I felt there wasn’t really any hope that they could maintain their lives as vampires, I didn’t believe that that would work.” - M

“I think the strength of the book was the writing quality. I found it off-beat and easy to read. I didn’t want to put it down.” - A

“I’d recommend it to others, with a health warning, I’d say it’s going to be a good read but not all that meaningful.” - H
Posted by Claire Bottomley Book Club Mum at Saturday, February 04, 2012
Email ThisBlogThis!Share to TwitterShare to FacebookShare to Pinterest