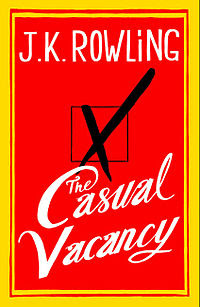 Pagford is a quintessentially English market town, with a cobbled market square and an ancient abbey. Within its parish boundary is a sink estate, The Fields, where the houses are run down and an addiction clinic does a busy trade.
Battle-lines are drawn between Pagford parish councillors who want to rid the town of The Fields via boundary changes and those who feel it should remain part of the community.

Thus we have all the ingredients for a searing critique on modern Britain. Daily Mail reading NIMBYs make excellent comedy fodder, while the lives of those desperately fighting a losing battle against inherited abuse, neglect, addiction and poverty are portrayed harrowingly well.
Rowling's brilliant depiction of teenagers is one of her best devices for highlighting the hypocrisy of their elders, but there are no pantomime villains here, as every well-rounded character and the way they impact directly or indirectly on one another is examined with forensic detail.

There was, of course, a lot of publicity around the publication of this book, which was unfortunate, as it meant the embarrassment of a very public puberty.
Writing her first 'adult' novel - enough titivation was gleaned from that double meaning alone - was bound to attract a lot of attention to someone who has thus far written some of the most famous children's literature on the bookshelf.

There is nothing unusually graphic or obscene in this novel, its language and sexual content is akin to most of the bestsellers around. But the Twitterati were full of clever puns and innuendo as readers trawled through to find instances of the Harry-Potter-lady swearing like - well - like silly schoolboys.

And its lukewarm reviews also had me wondering what the critics' real beef was here. Could it be that they saw this as an opportunity to pull this mega-successful multi-millionaire author down a peg or two?

A lot of the criticism was around the language, and the rather traditional form in which the novel took. Do other bestselling authors get judged by such academic frameworks in daily newspapers? Or could it be that there was a whiff of 'so you think you can write a proper novel, do you?’ about the whole thing.

On this count, the book speaks for itself. It's a thought-provoking, tragic fable with many a laugh-out-loud moment. Rowling’s characters are some of the most vivid around. By the end of the novel most of them are laid bare, and there's more than one lesson to be learnt about books, covers and judging.

I for one will be queuing at midnight for her next book (albeit online while I sleep soundly like the boring grown-up I am!)

Have you read The Casual Vacancy? I'd love to know what you thought.....