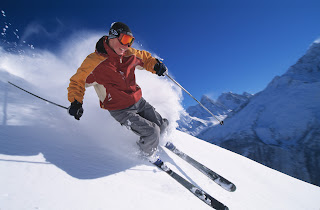 My husband is away skiing. To me, skiing is the sensation of being cold and frightened half way up a mountain and always needing the toilet.
On that basis, he has gone with friends to the French Alps and I remain here at home, with our Darling Little Boy.
He’s been gone two days and already it has been a revealing exercise. It has revealed that our son definitely has a favourite parent, and it’s not me.
It started before my husband left, when we trekked en famille to an indoor ski slope for him to ‘warm up’ for the trip, so to speak. Having booked in we set up camp in a coffee shop. I went to the toilet and came back to find father and son giggling like newlyweds. Husband went off to buy something and Darling Little Boy wailed: Where’s daddy? I just want a cuddle with daddy....”
It’s a familiar little mantra of his. “Did you cry like this for me when I went to the toilet?” I asked. The little blighter replied: “I do love you, buuut....” Then rambled nonsense.
Since his father has actually departed he has moped around the house mumbling that he “Just wants daddy” and has even looked me square in the eye on more than one occasion and informed me: “I don’t like this house with just you in it.”
Of course, we have big cuddles in front of CBeebies, enjoy Orchard Toys games, have sword fights and tickle in between these outbursts. We have a loving mother and son relationship.
But the balance has shifted as he’s got older. In the early days I was the one with the boobs, the one who smelled and sounded right. The books and the health visitor said daddy’s role was to be fun, to provide play and stimulation, but we all secretly knew that it was like the politics of nativity play casting, when every angel and shepherd is told that really, their part is the most pivotal.
But now daddy really is the star of the show because, quite frankly, less is more. His arrival through the door is greeted with great fanfare. Daddy’s presence punctuates the monotony of time spent with me, his primary carer.
And there’s the male thing. The mini-me thing. Don’t get me wrong, never again will I pass a building site without silently shouting out “Digger!” in my head. And, likewise, I am proud to say that my son still confidently tells everyone that his favourite colour is pink, has a dolly and likes playing Babies with his friends at nursery. So, we’re not living along gender stereotypes. But. I guess daddy is a man of action and I am less so. Hence the skiing. If only I were a skier.....
Wait a minute, on that note, perhaps I shouldn’t be too disheartened. Back at the indoor ski slope, while husband skied, we signed up for tobogganing. I threw myself into it, and when Darling Little Boy refused to wade through thick snow to the top of the hill, I gave him a piggyback and then sat him on my knee to toboggan down again. But he wasn’t impressed. He’d done better sledging in the park last year. He cried. I know that, had daddy been the one doing this activity with him, they would at this point have locked horns, father insistent that child give it another go and stop whinging.
And he would have run to me, playing us off against one-another, which is in fact his real modus operandi.
In the event, I looked at him and asked if he’d like to go back to the coffee shop. He smiled and said yes. Perhaps he’s his mother’s son after all.....