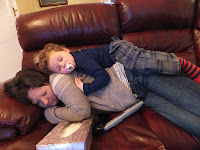 How do they do it? Other people, I mean. Immaculately stylish knitwear, a wondrous herb garden - it’s the question that always gnaws away at the back of my mind, where I harbour suspicions of some wonder drug or secret ingredient - but to a large extent accept that they are just considerably less lazy/have better taste than me.
At the moment, it’s energy. Or, to be specific, ability to cope with lack of sleep and constant physical activity.

Back in the day when I was a new mum to a tiny dictator whose torture of choice was sleep deprivation, I had every excuse to be dead on my feet. Now that Darling Little Boy is three and ‘sleeps through’, I don’t do badly for zeds.

But I looked on incredulous as he dropped his nap (given the choice I’d take one every day).  As his bed time nudges later, mine seems to be doing the reverse. I get nervous if the little hand gets anywhere past 11, even on that rare thing, a fun night out, and I am left wondering if the circle of life is speeding out of control, and Darling Little Boy will be tucking me in at an abuse-level  early age.
But – what a thing to admit – that’s not what bothers me. As a relatively young (31) mother of one child and a ‘freelance’ job, I start to look around me and feel a bit socially inferior. Yes, it’s that tribe of uber-alpha-super mums, each with three children and high-flying careers, not to mention the knitwear and the herb gardens – who all go to bed half-an-hour before they wake up looking Sarah Beany sexy and downing  many a gin and tonic at any given social occasion without any apparent repercussions.
So, this New Year, I decided to raise my game and stop being a quivering, jelly-legged sacredly cat in the face of a late night/hangover/small child scenario and go for it.
The double whammy of a ball on the 30th, followed by 12 round for dinner on New Year’s Eve were occasions I rose to admirably, if I do say so myself – staying up until 1am and 2am consecutively, partaking in plenty of wine, champagne and cocktails and rallying troops of friends to sign up to child-centred activities on New Years’ Day.
And what have I go for my troubles? A tongue ulcer and a cold sore that both husband and child have examined briefly with disgust.
My New Year’s resolution is to accept that I’m an inferior being and get over it.