BOOK REVIEW: When God Was A Rabbit 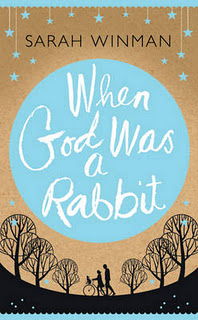 I really enjoyed this book. It’s my kind of book in that it’s by a wry, intelligent writer who has a keen eye for contemporary life and funny situations. She draws a complex central character who takes us with her on her journey.

Through the eyes of Elly, we follow the fortunes of her family, starting at her birth in late 1960s urban Essex and moving a decade later to rugged Cornwall, with the story reaching to New York and London in later sections.
There’s her mother and father, Kate and Alfie, older brother Joe and aunt Nancy, a gay actress. The characters who weave in and out of their lives drive the narrative.

They include Elly’s best friend Jenny Penny, whose mother’s neglect is subtly alluded to and yet raw. The fragile sincerity of childhood friendship and the vulnerability of the Jenny is depicted with real poignancy.
Also important is Joe’s teenage best friend Charlie, who is in fact his first love.


In Cornwall, elderly fop Arthur becomes their lodger, and along with his aging starlet friend Ginger they become part of the extended family.


The family is understanding and open-minded. This is refreshing, as it means that characters are not pitted against the well-worn opponents of prejudice and misunderstanding. By taking away the usual angst of social turmoil and setting the story in a home where a person’s sexuality is unquestioningly accepted and all are welcomed – where the father gave up law because he was wracked with guilt about successfully defending a paedophile and the mother fulfils a long-term goal of becoming a councillor, not to mention an out and proud successful gay aunt, the often painful journey through childhood and adulthood for the younger characters can be explored in more subtle ways.

An abusive experience at the hands of an elderly neighbour for young Elly and heartbreak for the gay teenage Joe leave lasting effects on their psyche, and as adults their relationship with one another is a crutch for coping with these. In an entirely unexpected way the mechanism of this relationship is disrupted at the climax of the book.

I think like many first novels, it has a feel of authenticity and autobiography, although the author makes it clear it is not autobiographical. Its cultural references, spanning from the 1960s to today, will be enjoyed by readers of the same generation.

It had shades of my favourite author, Kate Atkinson, with the wry asides and observations on the action to the reader. Its chronology of popular events, from John Lennon’s death to Princess Diana’s, Wombles and mobile phones, was reminiscent of Peter Nicholl’s One Day, and its more fantastical characters reminded me of the surreal world of Angela Carter.

Although for me this was a perfect read, I would hesitate before recommending it to my book club, since it is not much of a page turner and those addicted to thrillers may find it a bit put-downable!
Posted by Claire Bottomley Book Club Mum at Sunday, January 15, 2012
Email ThisBlogThis!Share to TwitterShare to FacebookShare to Pinterest