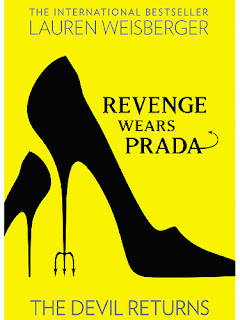 
Andy has met the love of her life, Max Harrison, who is heir to a media dynasty. But on the morning of her wedding, Andy wakes up from a nightmare which still haunts her. In it, she has failed to get Miranda her lunch. Thus, we get the uncomfortable feeling that all is not as rosy as it looks, and the past might just come back and haunt Andy in her waking life too.

When I started reading this I was a bit picky about what I felt were incongruities. For example, When Wiesenburger introduces Andy and Max, he opens up to her about the fact he doesn’t drink, because his father had an alcohol problem. Yet when they are reminiscing about their wedding, he claims the bar ran out of his favourite whisky. Later, they go on holiday with another couple and “all drink a lot”. Apart from Max, who avoids alcohol, and Andy, who is pregnant. So, they don’t all drink a lot, do they?!

This irritation aside, I at first found the characters and the writing style annoying – it was all quite affected.
But I was won round as the story, and Andy’s pregnancy, progressed. There’s nothing like a baby to keep it real, and to be fair, Weisenberger captured this extremely well.

Helen, who had read the first book and then seen the film adaptation, said she had reservations at first. “I felt like I wasn’t sure I liked Andy any more,” she said. But as the book progressed she got into it, and I we all agreed we liked the ending.

As Alison said, she: “Loved the bits about the baby group.” I couldn’t agree more, the scenes in which Andy makes new friends with a group of fellow first-time-mums are so enjoyable and so recognisable. And we should know, it’s how we all met!