My first novel, His Last Duchess was inspired by Browning’s monologue My Last Duchess – a wonderfully sinister poem narrated by a Renaissance aristocrat who candidly admits to having had his wife disposed of because he judged her to be lacking in judgement, promiscuous and disrespectful. I decided to tell a possible back story to this poem (exploring whether or not he did it, and if he did, why did he do it), and, as Browning’s verse based on historical fact, my era and setting were determined for me. My book was to be set in Ferrara, northern Italy, in the mid 16th century.

As I knew next to nothing about either Italy or the Renaissance, this necessarily involved copious research, but the more I read, the more I found myself falling in love with it all. In many ways of course the sixteenth century was a fiercely challenging time to be alive, but it was also rich and exciting, sumptuous and vivid – I was hooked! When I finished writing His Last Duchess, I quickly started on a second novel, with a secondary character from that first book taking centre stage: I took the duke’s mistress, Francesca and moved her to Naples, where she sets about the task of establishing a position in the city as a courtesan. This story became The Courtesan’s Lover. 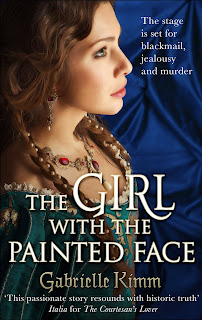 There is something very rewarding about writing historical fiction. I love immersing myself in a past world – a world that with careful research I can re-ignite and bring back to authentic life. For any fictional ‘truth’ to be credible, it simply has to be authentic, if the characters are to ‘live’ in the mind of the reader. I suppose every genre of novels demands a degree of authenticity, but perhaps historical fiction presents particular challenges, as you are necessarily bringing together the objective world of the historian and the elastic, subjective world of the novelist. Perhaps it’s this merging of the two worlds that I find so appealing to write. I’m not sure really – I just know I love it!

I try to do as much ‘hands-on’ research as I can for my books (within reason ... my second novel is about a courtesan, and there are limits!!). I’ve flown falcons and learned how to use a tinderbox; I’ve worked with a psychiatrist to analyse one complex character and I’ve spent a day in an antiquarian book restoration workshop, learning what happens when you burn a vellum-bound book! For my latest book, The Girl with the Painted Face, I ended up in a theatrical studio, learning how to stand and move as a Commedia dell’Arte actor.

The Girl with the Painted Face features a troupe of travelling players who become frighteningly embroiled in a murder accusation, and as I researched, I realised that, in order to be able to write about Commedia with any authenticity, what I needed to do was either to watch a performance, or (even better) try it out for myself. I contacted the artistic director of a troupe called The Rude Mechanical Theatre Company - a modern Commedia troupe who perform annually along the south coast of England – and as well as being given all the advice and help I could possibly need, I ended up in the company’s studio in Eastbourne, where I quickly discovered that the actors in my book would need to be decidedly physically fit and agile . . . by the end of the session I was absolutely exhausted!

My favourite historical writers? Definitely Sarah Waters, and this year I’ve read wonderful books by Imogen Robertson, Deborah Swift, Michael Irwin and am currently reading The Lunatic, the Lover and the Poet by the intriguingly named Merlyn Hermes.


The disappearance of
Emily Marr is out now,
to buy a copy from
Amazon, click here: