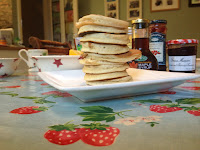 A Twitter friend asked me for a recipe the other day, after I boasted about being Clairey, Queen of Scotch Pancakes.

This is not a foodie blog and I am not the greatest cook in the world, or indeed in this household. However, that is precisely why I was so puffed up by my fluffy creations. They have prompted my husband - who has been known to wrest the pan from my hands when making standard pancakes lest I mess it up - to ask how exactly I do them. So for him, @wantedmynamebut and anyone else who is interested, here's the answer.... 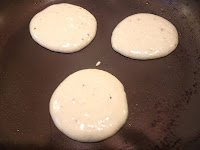 Rub a large flat frying pan with olive oil using a paper towel then put it on a high heat until you can see the oil just starting to smoke a bit then turn it right down.

Sift the flour into a bowl and add the pinch of salt and sugar. In a measuring jug, measure the milk and then add the egg, beat together roughly with a fork. Then pour the milk and egg mixture into the dry bowl and whisk together. It doesn't take much effort to combine it to a smooth consistency.

Now fill a tablespoon or small serving spoon with the mixture and drop it onto the pan. When a few bubbles start to appear, flip it over. It will only need a few seconds on the other side, then voila - it's done.

I do three at a time in my pan and usually get about 9-12 out of the mixture.
They are nice with maple syrup or butter and jam but believe it or not my little boy likes them with lemon juice squeezed over them and nothing else.

I began making pancakes for breakfast when he started school this term because I wanted to get something substantial into him fairly efficiently. somehow he can take three-quarters of an hour eating a bowl of cereal, which turns unacceptably soggy in the process and by then he's ready for something else - a piece of toast that gets lost behind his ear....

So with pancakes - an absolute favourite food of his - I knew he would sit and trough a fair few pretty swiftly. With these neat little Celtic beauties you could even take a couple to eat on the school run! And that note of domestic shoddiness is probably a good one to end on, so you can be reassured it is still me and that normal service will be resumed with the next post.... 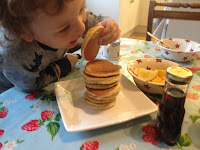