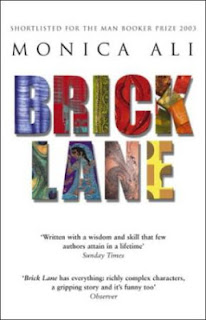 Timing is everything, as they say, and I think I’ve realised that a book often has ‘a moment’.

Encompassing the Oldham riots and 9/11, and published in 2003, Brick Lane did indeed make a timely appearance.

And it had quite a moment. It was short-listed for the Man Booker Prize, and its debut author voted Best of Young British Novelists on the basis of the unpublished manuscript.

So when it was my turn to choose for book club, I remembered how Monica Ali’s first novel had been recommended over the years and dusted it off from the shelf in my head marked Books I Should Read.

The story follows Nazneen, born in a Bangladeshi village and transported to London at the age of eighteen for an arranged marriage to a man 20 years her senior.


Away from her family and the only place she has known, she lives in a cramped flat in a high-rise block in London's Tower Hamlets. With very limited English, Nazneen is forced to depend on her husband Chanu, who is full of big dreams that never come to fruition.

Through visits from other Bangladeshi women she comes in contact with the Mrs Islam, a ‘respectable type’ according to Chanu, who turns out to be a menacing money lender, and Razia, who becomes a true and vital friend.

She gives birth to three children – and the experience of parenthood bring her much closer to her husband, as he is revealed to us to be more than a comedy figure and ultimately one we and she have true sympathy for.

She begins sewing for a living, and embarks on a love affair with the young man who delivers her work. Radical Karim brings the book’s backdrop of racial conflict and tension into sharper focus as it becomes a more central part of the action.

Nazneen’s journey – through her experiences of motherhood, the affair with Karim and the developing relationship she has with her husband – is one of self-discovery which forces her to question the role of fate in her destiny and ultimately leads to her taking control of her own life.

So how was it received by book club ten years on from publication? Let’s just say I was not hailed Book Chooser Extraordinaire!!

There’s a theory that in good economic times we are keen to examine social problems, but in more straightened times we want comfort and pleasure from our books, plays and films.

On a more personal level, perhaps a book club with members who are still at the coal face of domestic care – brushing little teeth and wiping little bottoms on a regular basis – a novel that focuses on domestic servitude can be a bit hard to stomach. A major complaint was the frequency with which our heroine was called upon to tend to her husband’s corns.

Indeed, the book uses very repetitive motifs; characters behave in the same way, taking a long time for changes to occur in their lives and the story to unfold.

It was described as meandering, and I certainly did not find it a page turner, though I cared about the characters and what happened to them.

I liked the fact it gives a voice to a woman without one, and gently undermined the two male characters who are constantly orating – Chanu within the domestic sphere and Karim within the community.

I also found a lot of humour in the book. Mrs Islam has an unhealthy dependency on over-the-counter-drugs, and Nazneen observes, deadpan, that since she had never in fact been heard to cough, “Benylin Chesty Coughs was very effective”.

I think Ali is an excellent writer and the novel a great achievement, but without the political punch of a timely publication date it loses something of its initial impact.

Next time I’ll chose something from the current bestseller list. Promise!
Posted by Claire Bottomley Book Club Mum at Thursday, October 18, 2012
Email ThisBlogThis!Share to TwitterShare to FacebookShare to Pinterest