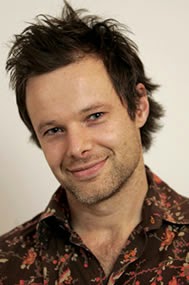 Welcome Andrew Clover, who is on a blog tour to promote his new book, The Things I'd Miss. I used to like reading Andrew's column, Dad Rules, in the Sunday Times Style magazine. I miss it! So it's pretty cool to be able to ask him a few questions here...

First book you remember reading?
A Fly Went By by Dr Seuss. I was walking through my brother’s room, I kneeled down to read it, and I still remember finishing it and thinking: I just read a whole book on my own! I can’t tell you what the plot was. I think it involved a fly, which went by.

How do you decide on what book to read?
Well I write literate love stories, so I read up the best stuff in that genre (Beautiful Remains, One Day, Where’d Did You Go, Bernadette..) While Latest column page 6, in which I compare my children to a well-known dynamic     duo....