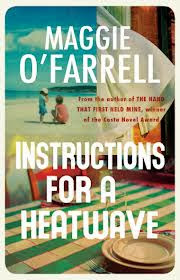 It’s a catchy title, and one the marketing people must have been rubbing their hands with glee about, given the soaring temperatures that quickly followed the book’s publication.

But I would say the title is exactly what lets this novel down.

Recently retired bank manager Robert Riordan goes out for a newspaper as usual and doesn’t return, prompting his wife to call on her three grown-up children to play out a very domestic drama in which secrets are uncovered and relationships explored.

The heat wave scorching London in 1976, when it is set, keeps a cool distance. Just a few references to aphids and water restrictions establish its presence, with no sense of a wider national event.

In fact, the story just doesn’t seem to suit either the setting or the title. It’s a carefully-crafted family drama – the stuff of the well-made play or quality television series, to be consumed in a cosy velvet theatre seat or cuddled up on the sofa, not the last word in holiday reading, as I had anticipated.

Robert’s abandoned wife, Gretta, is the matriarch of the Irish Catholic family, which gathers at her home for the first time in years. The oldest son, Michael Francis, is a history teacher whose marriage is in trouble. His sister Monica has two stepdaughters who despise her and a secret of her own. Aoife, the youngest, now living in New York, is a bright and interesting character whose life is heavily affected by her constant efforts to conceal the fact that she can’t read – dyslexic in a time before the word existed.

There is a departure in structure for O’Farrell in this book. In her previous novels, she’s relied heavily on the device of a split time-frame, with us the readers working out how past and present are connected.

But here time is very linear, covering a period of a few days, with the rest of the story filled in for us via flashbacks. It means that, once the characters are introduced and the premise of the story set up, there is a section that seems quite flat. Despite this, O’Farrell manages to pull a few rabbits out of hats and reveal a spine-tingling secret at just the right moment to inject the story with meaning and suspense.

O’Farrell’s previous book, Costa Award-winning The Hand That First Held Mine, was one of those all-consuming reads that left me haunted and bereft once I’d finished it. I thought it was her best to date. She seemed to be on an upward trajectory, her work improving with every new story.

So perhaps it was inevitable that this one left me, if not cold, then at least needing an extra layer. But it was still very enjoyable and well written. If not highly recommended, then I’d certainly forecast that you’d find this a fair to middling read.
Posted by Claire Bottomley Book Club Mum at Thursday, September 26, 2013
Email ThisBlogThis!Share to TwitterShare to FacebookShare to Pinterest