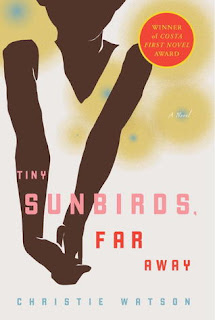 We meet our 12-year-old narrator, Blessing, in Lagos, living with her parents and older brother in an air-conditioned apartment in one of the city’s most affluent streets.

But soon Blessing’s father has an affair and leaves, forcing the rest of the family to move to a village in the Niger Delta, to live with her mother’s family. Plucked from a comfortable life to one without running water or electricity, Warri seems appalling to Blessing, who says: "I opened my eyes as wide as they could go, to let in all the differences”.

She tells us what is not there - healthcare, hygiene, education – but as she forms relationships and learns about her environment, she describes beautifully what it does contain with humour and warmth.

Blessing becomes close to her grandma, a strong, wise character, who decides to take her on as a trainee midwife attending to women in the
surrounding countryside. Blessing describes the sense of wonder, responsibility, purpose and identity this role gives her – as well as introducing the horror of genital mutilation and the dangerous complications it can cause in childbirth.

Soon after their arrival, Blessing’s grandfather –who is trying out Islam as his new religion – decides to take a second wife. Meanwhile, Blessing’s mother becomes distant, working long hours at a hotel. Her brother, Ezikiel, turns from a keen pupil with plans to become a doctor, to an angry young man, falling under the influence of the local group of violent teenage boys railing against the corruption and destruction brought to the area by British and American oil companies.

Blessing's lilting sing-song voice makes her a captivating story-teller – and it is a style which reflects and evokes the tradition of oral storytelling. At the end of the book, Blessing embarks on a re-telling of her story all over again, and it reminds us of the importance of stories and their being heard.

“I never would have chosen to read this book” – was the verdict of a few of us book club members, “but I thoroughly enjoyed it”.

Having not even read a blurb, I had to double check that Lagos was in Nigeria. If I had known that the book’s subject matter included genital mutilation, I’m ashamed to say I might have put it down and turned away, an uncomfortable issue I did not want to confront. But, lead by the hand of an accomplished writer, it was a journey I was so glad I’d made – funny, shocking, happy and sad.

When we started out, we hoped book club would broaden our literary horizons and make us read outside our comfort genres, and this is a great example.