What are your top five children’s books of 2012? 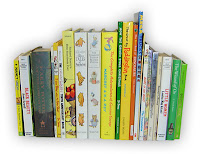 With all the Father Christmases among us thinking about stocking fillers, ideas for re-stocking the bookshelves can be a very useful way of avoiding too much tat. Likewise, books make good gifts for other people’s children and help maintain peace on earth with parents who are dreading even more plastic toys invading their homes.

I'm always really interested in recommendations for children's books, so please, if you have a moment, share any books that have been a hit with your wee ones as a comment below. To get the ball rolling, here are the top five books that I think my son, who turned four in October, most enjoyed in the past year...... 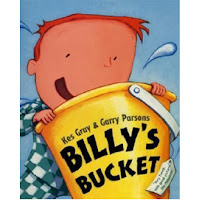 by Kes Gray and Garry Parsons
Instead of some trainers, a bike or a computer game, all Billy wants for his birthday is a bucket. Despite the protestations of his cynical mum and dad, Billy is determined, and eventually they visit Buckets R Us, where he picks out the exact one he wants.
Unlike the other presents he was offered, the bucket – and a little imagination – have infinite possibilities. Once he’s filled it with water, among the amazing things Billy sees in his bucket are a rock pool, a shoal of barracuda, two scuba divers and a coral reef.
While Billy relishes his gift, and thanks his parents for the “best present in the world” – they start to tease him about it.
However, at the end of the book, they learn their lesson, and it’s a stark warning to other parents out there who might lack imagination too..... 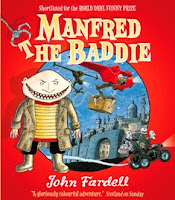 By John Fardell
Manfred the Baddie was the baddest baddie of all.....that is until he got poorly and no one wanted to look after him. Manfred’s baddie shenanigans take a turn for the better once he realises the error of his ways. A very funny book with great scope for silly voices.... 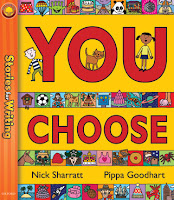 by Nick Sharratt and Pippa Goodhart
A Christmas present from last year, this has been a hardy perennial and I can see its popularity surviving well into 2013. If you could go anywhere, where would you go? Given a double page packed with illustrations of a city, a beach, a forest, a volcano and much more, my little boy usually chooses the waterfall. Each page is filled with dozens of illustrations – of places to live, ways to travel, things to eat and jobs to do. It’s a great book to enjoy together. We usually allow ourselves three choices each..... 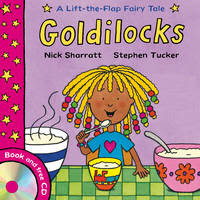 by Nick Sharratt and Stephen Tucker
Flap books were still popular with my little boy this year – their appeal had a lot more longevity than I realised. This series of fairy tales rattle along with a fast rhyming pace and tell the traditional tales in a fun and up-to-date way. “Goldilocks had big brown eyes and such a pretty smile; She wore her curly yellow hair in funky dreadlock style.”
We’ve also got Cinderella, Red Riding Hood and Jack and the Beanstalk. 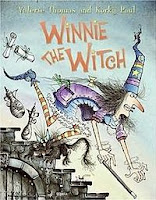 by Valerie Thomas and Korky Paul
I think I even remember Winnie the Witch from my childhood. She was very new then, but her appeal has clearly endured and there are now lots of stories about her available. My son was given three of these books for his fourth birthday and they became instant favourites, Winnie’s New Computer in particular. He asked me the other day why Winnie is a good witch – I think he likes the fact that she is not a scary character but funny, grumpy and harmless, and the amusing interplay with her long-suffering cat Wilbur.
I’ve just had a quick peek online and there are loads more available, I’m sure Father Christmas will be interested to know.....