BOOK REVIEW: Are We Nearly There Yet? Plus interview with author Ben Hatch

You know how if it’s someone else’s child having a tantrum, it’s not at all stressful? In fact, perversely it’s quite relaxing, reassuring and even amusing?

That, in essence, is what it is like to read this book. Ben Hatch’s account of how he and his wife Dinah travelled 8,000 miles round Britain with their two toddlers in a Vauxhall Astra is a great read for several reasons.

To start with, there’s plenty you can relate to. The purpose of the Hatch’s trip was to write a guide book of family-friendly accommodation and attractions in the UK, and it is like an extreme version of every daytrip you’ve ever been on, complete with spilled drinks, near-miss danger moments and crack-you-up one-liners from the wee ones.

Secondly, the beauty of a book like this is that it is perfect for the drained parents of pre-schoolers, in that you can happily dip in and out for short and fairly self-contained episodes. Therefore, it can still be enjoyed despite constant interruptions, and will not manipulate you into reading past your bedtime and losing precious sleep.

In all honesty, I never thought I would enjoy non-fiction, and had never really read any recreationally. Or at least that’s what I thought, until I began reading and remembered how much I had enjoyed Gerald Durrell books as a young teenager. And the affectionate, observational humour has indeed been compared to Durrell’s writing in books like My Family and Other Animals, as well as that of fellow travel writer Bill Bryson.

And why wouldn’t I like non-fiction? I love reading columns, some of my favourite books started out life as columns, and I even have the nosy satisfaction of following the real-life protagonists, Ben and Dina Hatch on Twitter long after the events of the book have past.

The book, as often seems the litmus test on blurbs, made me laugh and cry, and there are an uncanny number of themes in Ben’s life that cross over with my own. His experiences working in local journalism and of caring for his young children being the most obvious. But there are universal themes made poignant in the travel book genre which will have a broad appeal - the memories and associations lurking in so many parts of the UK once you reach a certain age, and the way you live, or rather re-live memories as well as living in the now.

Mostly, the self-deprecating humour of Ben himself getting into scrapes are the funniest, most engaging parts of the book. Here in my home city of Leeds he spends several days in hospital with a health scare he manages to recount with eye-watering hilarity.

Essentially, it is the very personal story, by Ben, of his most important relationships and feelings, including a very moving account of his father’s death.

Perhaps the reflective tone is most typified at the end of the book, when he drops his daughter for her first day at school. As he watches her go, unperturbed, and quietly returns home to the details of the everyday, it is a quiet moment shared with the reader (I for one was in floods of tears) as a small but hugely significant milestone is passed. 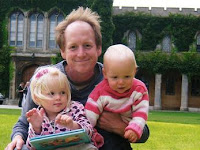 Did you always have in mind that you would write this book about the trip, as well as the guide book?

No, not at all. What I wanted to do was something very different. I had this idea that the guidebook itself should also be the story of our travels. I wanted it to be revolutionary. My idea was that it could be read as both a travelogue and a guidebook. With this in mind I tried to slip in as much personal detail about our trip as I could to compliment the usual type of guidebook detail about opening hours and admission prices etc so that if you read it from cover to cover it would also tell the story of our road-trip. It was very ambitious and my commissioning editor at Frommers, Mark Henshall, probably quite rightly, said the idea was bonkers and took out most of the personal details. I think it might have worked but his stance was that suddenly announcing, in a review of Legoland, say, that I had just had a kidney stone scan was slightly incongruous. He loved the personal stuff and because he’s a great fella and felt so bad at having had to take it out, he put me in touch with my eventual editor, Jennifer Barclay, at Summersdale, who published Are We Nearly There Yet?

Did you have a clear idea of the style the book would take or did it evolve as you wrote?

I don’t really consider it has a style, it’s just me chatting about what happened to us on our travels - who wet themselves where, what’s the story with the Nazi and the ghost in Crastor etc - and then also rabbiting on about my relationship with my dad and how much of a nob I was as a teenager like, for instance, the time when I almost got my mum’s car blown up in a controlled explosion at the BBC when I parked it in a space reserved for the Prime Minister at the time of a IRA terrorist alert.

Was it difficult to decide what should and shouldn’t go in the book?

It was and it wasn’t. I wrote the book very quickly for me - in six months. So I couldn’t mess about agonising over sections I’d like to include. I had to stick to the main points of the story. In terms of places it was harder. I wanted to write about every town and city we went through but it would have made the book twice as long and a little unwieldy. As for what shouldn’t go in, the one part of the story that people have questioned is the toothbrush incident! I won’t go into detail but it’s a rather horrible thing I did with one when I felt quite unwell. I included the scene and what happened at the hospital later very much at the last minute. I’m not even 100 per cent sure my editor got to read it. It doesn’t reflect very well on me, and it has led to problems when I’ve visited other people’s houses since and have used their bathrooms but it made me laugh so I thought, go on then, and just stuck it in (if you’ll excuse the pun). I woke up in a cold sweat when the edits were approved, however, and realised it was going to appear. I was also worried about how graphically I’d written about my dad’s sickness, particularly as I knew other family members, my brother and sister, and particularly my step-mum, Mary, would be reading it. When they read and enjoyed it, it was an enormous relief to me. It also shows how lovely they are for allowing me to hijack what is an important part of their lives as well.

Were there parts that were easier and more difficult to write? Was it hard for you to write about your dad’s death?

The easiest parts to write were the bits about my dad being ill. I didn’t have to think too much about them. I just wrote what I remembered and felt. Sometimes when you’re writer you’re conscious that you’re recording an incident for inclusion in a later book and you take notes with this in mind. You tweak reality and you’re feelings and impressions a little to make it funnier or more poignant. It wasn’t like that with my dad. It was just very much as it happened.

What are your observations about writing comedy?

What kind of input/criticism/censorship did Dinah have?!

Ha ha. She was the first person to read the first draft as she always is with my books. There were only a few things she objected to which I cut out. I think I tried to make out she didn’t know where Italy was on a map of Europe. She disputed that and proved during a subsequent test that she did. In terms of criticism, mainly that’s been about perception – if I’m recording an argument about owls we had, for instance, she might say, “how dare you say I said that, that didn’t happen that way at all. You said that about the barn owl’s directional hearing.” But on the whole, owls and Italy aside, she’s been remarkably relaxed about it. Much more than I ever would be. But then she’s a bit of a hero.

What do Phoebe and Charlie think/remember of the trip now?

Absolutely nothing. I asked Phoebe the other day about it and she couldn’t dredge up a single concrete memory apart from the fact she left her favourite teddy in Blair Drummond safari park. Eight thousand miles, 1000 attractions, virtually every zoo and safari park in the country, dozens of galleries and museums, cable cars, boat rides, mountains we scaled, mines we went down, walks, hundreds of meals out, rollercoasters, donkey and horse rides, dolphin and seal spotting, over 50 castles and she can ONLY remember how upset she was that she left Nelly rabbit near a Vietnamese pot-bellied pig in the petting zoo for an hour before we drove back to retrieve it. Although I’m sure bits must have seeped in somewhere. For instance, she wasn’t ever car sick then but has recently developed this trait. I think it’s a self-protective measure on her part to ensure we don’t ever do the same thing again.

In a way the book tells two stories – the trip and your life story, was it complicated combining the two?

Not really. It seemed a natural thing to do. Because we were travelling to so many places where I used to live (and I have lived in a lot of places) that tended to form a natural structure to the story. The fact that was dad was ill made me naturally more reflective too about the past and my own childhood. So you have the two stories – our family now driving about smelling because we’ve not been to the laundrette in a month. And my own less chaotic childhood with my dad set against it.

My favourite memory is of eating chips in a car park in the rain in Bath. I’d wolfed my battered sausage and was killing time waiting for the others to do the same. The windows were all steamed up so there was nothing to see so I decided to have a look through some of the photos on the digi camera. It was only spooling back through them, going right back to the start of the trip, seeing the kids looking physically younger, and the weather changing with the seasons and the landscape altering, that I realised what ground we’d covered, how long we’d been on the road, and what an amazing experience we were in the middle of. My favourite part of the book is the bat attack in Kielder. This sounds very vain, and this very rarely happens, but I was actually laughing to myself when I wrote it. It was the epitome of the trip, of the random chaos we encountered.